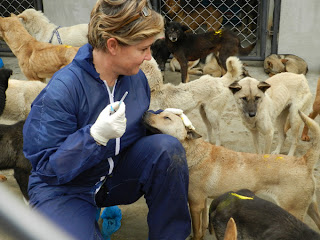 As a dog lover, this is a difficult topic to write about. Often as a writer in this field I am privy to cruelty and neglect stories that I wish I had never heard about. At times, I am torn with reporting the barbaric acts and depressing my readers because I know how deeply I am affected when I hear about them, and I don't want to dampen anyone's day.

BUT... there are times when because of people learning about what is going on in the world, we, together, can promote change and put an end to allowing dogs to suffer any longer.

This is one such time.


If you haven't heard, each year in China, there is a “summer solstice dog eating festival” in Yulin in the Guangxi Zhuang Autonomous Region.


It is set to take place this year on June 21st but animal welfare activists from a worldwide group called the Animals Asia Foundation are already lining up against it in large numbers in an effort to stop this horrific practice. Here is what they are doing:


“An open letter from Animals Asia in opposition to the event has been sent to the Guangxi Yulin government.  Copies of the correspondence have also been shared via Animals Asia's Weibo accounts, receiving well over a thousand shares and hundreds of comments - the vast majority in support. The letter had been forwarded to the Mayor as well as representatives from the Tourism Bureau, Health Bureau, Cultural Bureau, Husbandry and Veterinary Bureau and the Food and Drug Administration.”

Animals Asia is also actively working to rescue and rehabilitate dogs from the meat trade, many of which are stolen from owners. This one shelter has already rescued over 700 dogs alone. Founder Jill Robinson says:


“We have heard the argument that dog eating represents Chinese culture and tradition. We have long answered that culture and tradition are no excuse for cruelty and brutality.  We would also like to point out that China has an increasing culture of animal welfare and heightened concern over practices such as these.  Traditions should not be above criticism.  Neither should they be exempt from change.

In Chinese society dogs are becoming increasingly recognized for the help and assistance they provide to those in need. We now have guide dogs for the blind, therapy 'Dr. Dogs' and dogs assisting customs officials and the forces in detecting illegal contraband and explosives.

Dogs have also assisted rescue services to find victims and survivors during earthquakes and other tragedies, and increasingly provide companionship and comfort in family homes."

The good news in this story is that the animal activist movement is growing in China and speaking out against the atrocities.

So what can we do here in the USA or whatever country you may be reading this?
We can publicly support Animals Asia Foundation. We can also donate money to Animals Asia for veterinary costs for the rescued dogs. There are also many ideas on their website for fundraising. Animal related merchandise is available for purchase which also helps supports the organization  If you are a blogger, you can help spread awareness and get this cruel practice into the media. If you are not a blogger, you can utilize your social media accounts to get the word out.

Thank you for taking the time to read this. I know it's not easy but it's vital.