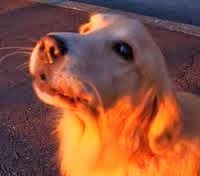 My Django, a black Lab, might be considered mute in doggie terms. She never howls or cries. She will bark, quite ferociously upon seeing a stranger outside the house, but that is rare. On most days, she exudes no noise.
Our Chihuahua, Hayley is quite the opposite. She will squeal, cry, moan, at any given moment of any given day and every single time the doorbell rings. They are opposites in every way.
Still, neither of them attempt to speak the way some dogs do. Vocal prowess is just one of the reasons why I love Siberian Huskies so much. Mishka is an all-time favorite. But after seeing the video below, I do believe that this dog might give Mishka a run for her money.
This video hails from Japan and features a golden retriever, who, upon hearing a nearby ambulance siren, recreates the sound with detailed nuance. The howl is one thing, but the  little ooh, ooh, oohs at the end of each howl are not only hysterical but truly scrumptious.

Watch as this cute dog imitates an ambulance!