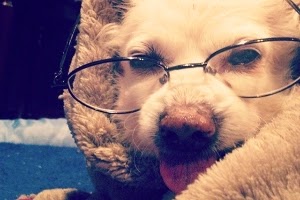 Our little Hayley has had a rough couple of months. She was diagnosed with canine diabetes and then just a few weeks later, Cushing’s Disease. It has been a long and continued battle to get her blood sugar levels down to an acceptable number due to the fact that her Cushing’s Disease (stemming from a pituitary tumor) has her endocrine system going haywire.

After months (and several weekly vet visits), I took her in to have yet another two-hour blood test performed to see if her cortisol levels and endocrine system were working any better since increasing her Vetoryl (Trilostane) from once daily to twice daily.

I always feel bad before she gets bloodwork done because she usually has to stop eating and drinking at midnight, and for Hayley this is an immense task. Due to her diabetes, she is constantly hungry and thirsty and not just, I could use a treat hungry, but ravenous to the point of eating anything from the floor, and almost crawling on our lap if we are eating something.  The constant drinking means there is constant need to go out in the yard, of course. Two days before her last test, she went out and sort of slip-slopped her way down the four steps of our porch, but it had been snowy and slippery. She wasn’t hurt and I didn’t think much of her misstep…until the next day.

I put her food down in the morning. She came out but seemed not be able to find it. I motioned it’s over here Hayley, and she heard me and came over. Just a week ago she was methodically watching my every move awaiting mealtime, but now she didn’t. Then later on that day, she ran right into a kitchen cabinet and the foot of the couch and the wall. My first thought was that she had too much insulin (although this never happened before). Her vet, Dr. Beverly, always clues me in to what to look for concerning her diabetes management so I have been on guard. But she wasn’t dumpy or too sleepy; she wasn’t just laying around or listless. It seemed like she just could not see.

The next day we got good news and bad news. The good news is that after months and months of fine-tuning her medication and insulin, she was responding to the medication for Cushing’s. Her blood sugar was down to the low 300s after remaining in the high 500s even with increasing doses of insulin. However, she was going blind from diabetic cataracts. I was told a thick cataract is covering her eye inhibiting her vision quite distinctly. In young and healthier dogs, a quick surgery can easily remedy it but between her heart murmur, advanced age, and health conditions, Dr. Beverley and I both feel that it is not safe to put her through any type of surgery.

It was something I never expected and it happened so, so fast. We don’t think she can see anything. She can’t see a hand in front of her with food, but can only smell it and try to locate it. She can’t see an opened door or a tree, so we have had to accompany her outside multiple times a day to the yard. She walks funny on her leash because she’s so unsure of where she is going.

Now we are learning how to care for a blind dog. The most important part of it is just keeping her safe. She tumbled down the basement stairs last week and now we are vigilant in keeping all doors closed at all times. I am reading how it is a delicate balance of teaching her to remain independent and not carry her everywhere but provide her help when she needs it. With the recent snowstorms in NYC, we have been extra protective of letting her out because we have a back porch that she will fall right down if left to her own devices, particularly with the icy mess it has been. My kids and I take turns caring for her everyday. It is like another job so taking shifts helps. At night, we put her bed in her crate and make her sleep in there so she will not get hurt, and she doesn’t seem to mind it at all, even after years of sleeping out in the open wherever she wanted.

I have said it before, she is still as spunky and free spirited and even happy as ever, despite her never-ending challenges. She’s the strongest lady I know, and quite the inspiration.