How An Adorable Labrador Helped A Couple Find Love 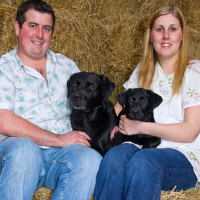 If you’ve ever tried online dating, you may have found that it can be just as difficult as regular dating. You scroll through several faces, trying to find a person who is compatible and attractive to you using this one dimensional cyberspace communication vehicle. While you may be attracted immediately to a face, you also might pass over someone with a very attractive, funny, and engaging personality.

Maybe you should try using your dog in your dating life.

Richard Craggs signed up for Match.com and had very little success, so as a joke he switched his profile picture for that of his beloved pooch, George, a black labrador retriever. Kate Beddow happened upon his photo and was immediately drawn to George the dog, having always loved dogs and also thinking that the man who put up the photo must have some sense of humor. She wanted to get to know him more.

Katie admits that the sight of George immediately drew her to Richard’s profile:

“I always wanted a dog, so when I spotted George online it made me laugh and think ‘Aww how cute!’ I had only been on the site for a few weeks when I spotted the bizarre profile picture of George. When I clicked on it and read Richard’s profile the idea he had used George’s picture really tickled me so I contacted him through the site. I messaged him saying ‘Does your dog know you are looking for love?!”