The Humane Society of the United States recently announced the top five finalists for the Pets of Valor Award. "The award celebrates the human-animal bond by honoring rescued or adopted dogs and cats who have exhibited an extraordinary sense of courage or resolve by heroically helping a person in need."

They say a shelter dogs (and cats) know when they have been rescued and will do all they can to show their owners just how appreciative they are. Everyday we hear terrible stories about animal abuse, but also heartwarming stories about how incredibly strong animals are who have come through a desperate situation and ended up healing with the love and help of a kind hearted person.

Each of these finalists and their owners deserve an award.... as do all who care enough to dare to rescue and help innocent dogs and cats, and other animals who need it. And these dogs and cats... well, they each deserve a medal of honor!

Here are this year's finalists (and happy ending stories!): 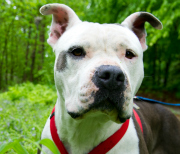 Chilly, English bulldog mix, adopted from Fluvanna SPCA (Mineral, Va.)—Chilly whined and urgently pawed and licked her owner’s face, waking her from a nap. The owner awoke to discover that her throat was swelling shut, a symptom of the life-threatening anaphylactic reaction to the allergy injections she had received earlier that day. 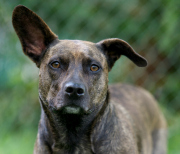 Lilly, pit bull mix, adopted from Joe Joe’s Place (Beachwood, N.J.)—When her owner suffered a brain aneurysm during a hike in the cranberry bogs at a state park, Lilly got another hiker’s attention and led him back 150 yards to her unconscious owner’s side 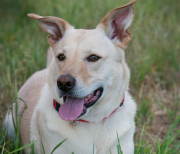 Rocky, Labrador retriever mix, adopted from Lassen Humane Society’s Pups on Parole program (Susanville, Calif.)—When his owner collapsed from a low heart rate in a remote wooded area while on a rockhounding expedition, Rocky stayed by his side for 7 ½ hours, licking him to keep him alert and helping slowly guide him back to his truck. 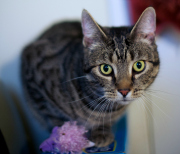 Taz, tabby cat rescued as a stray, cared for by the Humane League of Lancaster County (Lancaster, Pa.)—During the night, Taz emitted an uncharacteristic cry that woke his owner as a fire spread through the home. It gave him just enough time to wake his fiancé and her daughter and for the family to escape the burning home along with Taz and six other pets. 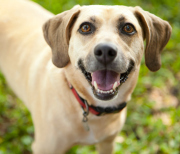 Mabeline, Rhodesian ridgeback mix, adopted from Friends of Strays Animal Shelter (St. Petersburg, Fla.)—Mabeline sprung to action when the young shelter volunteer who was walking her was attacked. She barked and growled until the attacker, a registered sex offender who was later arrested, fled the scene.

To view the complete stories of these brave pets, click here.

Voting to determine the winner is open from May 24 to May 31 at 5:00 p.m. EDT. Individuals can vote once per day. They can sign up for daily reminders by texting VALOR to 30644*