Could Your Chubby Puppy Use A Diet? 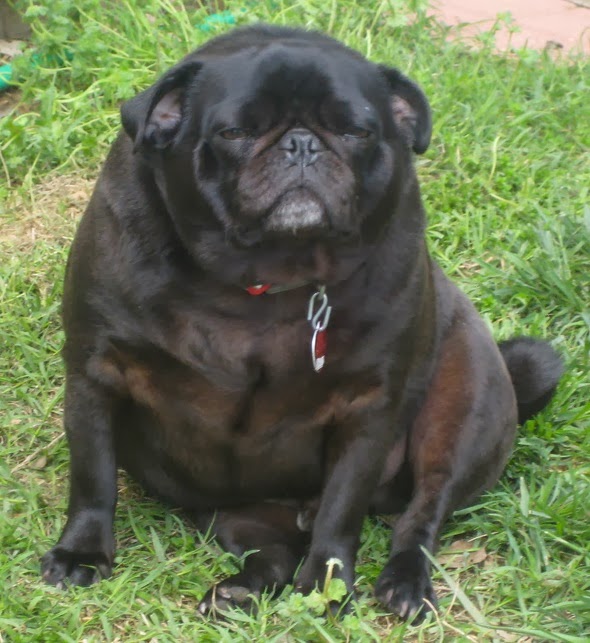 This cold and snowy winter hasn't only left us with less exercise and more comfort food, but extra pounds. And not just for us, but also our pets. Those long, summer night walks around the neighborhood just haven't happened around here especially with the mounds of gray snow and sheets of ice that blanket most streets and just doesn't seem to go away.

Also, my dogs have been more hungry than usual. I know that dogs are supposed to eat more in the winter, particularly dogs that are kept outside most of the time (I hate that this still happens). I haven't increased the food intake of my dogs but I have splintered out their daily meals. I have been trying to feed them smaller meals three times a day, instead of just two larger meals.

I'm not entirely sure this is working. Hayley, our chihuahua/eskie mix is getting a bit chubby. When we first rescued her, she was very overweight because she had been with an elderly owner who let her have free food all day long. She weighed in at nearly twenty pounds when we adopted her. Within a year, due to a feeding schedule and daily walks, she shrunk to a svelte 14 pounds. But now she is close to 17!

Our vet says she is in good health for her age (nearly 11) and there is no need to worry too much about her weight, but I don't want extra pounds to pose any problems for her as she ages, so I have been looking into ways to change her diet.

I've tried diet dog foods before but she just will not eat them. Then I was given a bag of Beneful Healthy Weight dog food. I placed it on the bottom shelf of my microwave cart and left it there until the food we were currently using was finished, and I kind of forgot about it. I don't like to have two different bags of dog food opened at once because I don't want the food to go stale or lose its flavor.

Then one night while I was helping my daughter with dreaded Trig homework, we heard a little nip at paper. Then a rowdier tug and then a gnawing sound. Hayley had found the Beneful and was chewing her way into the bag. My daughter and I just looked at each other and laughed but let her continue a bit because it was something she never does and it was amusing to watch. I realized that there would be no problem with her eating the food. She already seemed to like its scent from outside the bag!

I put some kibbles in her bowl and she proceeded to inhale the bright green and brown bits. Although larger than the kibbles she usually eats, she seemed to enjoy them more. Django, our black Lab (who is a picky eater and needs to eat more) even wanted some.

I like that the kibbles are filled with real food: carrots, chicken, green beans, corn. They are larger but not quite as hard as run of the mill kibble. The food is said to contain ten percent less calories than typical dog food. I am going to stick with Beneful for a while and watch Hayley's weight while incorporating longer walks into the week as the snow hopefully comes to a halt and the temperatures rise.

Has your pup gained a little extra this winter? Have you tried reduced calorie dog food before? If interested, you can most likely find Beneful in your local supermarket, and you can also order directly from Pet360.  While you're there check out their updated food recalls list (13 recalls have been added in the past 90 days). They also have a ton of useful information for pet parents.