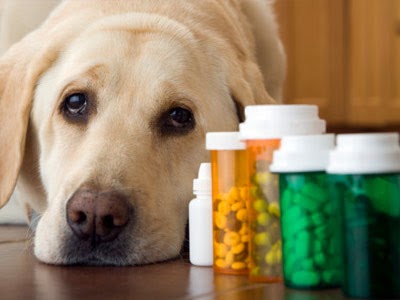 
NEW YORK—The ASPCA® (The American Society for the Prevention of Cruelty to Animals®) and its Animal Poison Control Center (APCC) today revealed that human medications again top of the list of toxins most commonly ingested by pets, according to cases handled by the APCC. The ASPCA’s Animal Poison Control Center, headquartered in Urbana, Ill., handled more than 167,000 cases in 2014 involving pets exposed to possibly poisonous substances. Nearly 16 percent of those calls (26,407 cases) were from owners whose pets got into medicines intended for human use, putting this category at the top of the toxin list for the seventh straight year.

“Just like children, our pets explore the world with their mouths. Unfortunately, our pets are much stronger and agile, with the ability to chew right through pill containers or jump to typically out-of-reach hiding places,” said Dr. Tina Wismer, medical director of the ASPCA Animal Poison Control Center. “It is so important to keep all potential toxins completely out of reach, and to take your pills behind a closed door away from your pets,” Dr. Wismer advises. “If you drop your medication, your dog can scoop it up quicker than you can say ‘poison’.”

According to the ASPCA, the top ten calls into the APCC in 2014 involved the following toxins, ranked in order of call volume:


In addition to sharing its list of the top toxins of 2014, the ASPCA Animal Poison Control Center also released a new mobile app – APCC by ASPCA.  Featuring a searchable database of more than 275 toxins as well as helpful information for owners of dogs, cats, horses, and birds, the free app helps pet owners quickly and accurately identify common household hazards, toxic and non-toxic plants, potentially harmful medications, as well as warm and cold weather hazards.

The app also features high resolution images,  potential symptoms for each identified toxin or substance, a built-in rodenticide poison calculator and a chocolate ‘wheel’ to help determine if your pet has gotten into dangerous amounts of chocolate. In addition, the app also gives pet owners one-touch access to the Animal Poison Control Center’s telephone hotline, which is open 24 hours a day, seven days a week, 365 days a year.

Information in the app is provided by expert toxicologists at the ASPCA’s Animal Poison Control Center, which handles more than 165,000 cases each year of pets exposed to potentially toxic substances. The app is a free download for all iPhone and Android users.

For more information about the top toxins of 2014, and other household items that could harm your pet, visit www.aspca.org/apcc. If your pet has ingested something toxic, please contact your veterinarian or the ASPCA’s 24-hour APCC hotline at 1-888-426-4435. Since its opening in 1978, the APCC has handled more than two million cases.