The Shame Game: Why It Doesn’t Work In Dogs 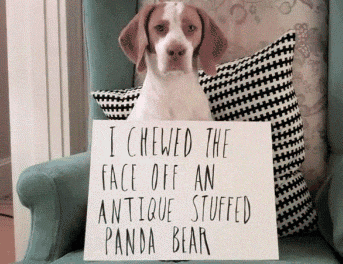 It’s a statement I’ve heard to many times before. An owner will come home to find a chewed up shoe or a big puddle on the floor and utter something similar to this: “Then I took him right over to the puddle and said ‘bad dog, what did you do’. He knew he did wrong because he looked so guilty.”

And here is the honest, scientific truth: He or she has absolutely no idea what he/she did was wrong. The poor pup is just reacting to the owner’s tone and possibly anger. It is a faulty way of disciplining because the dog is not learning a thing.

Behaviorists insist dogs lack shame. The guilty look — head cowered, ears back, eyes droopy — is a reaction to the tantrum you are throwing not over the damage they did hours earlier.
Dr. Bonnie Beaver, a professor at Texas A&M University’s College of Veterinary Medicine and executive director of the American College of Veterinary Behaviorists, had this straightforward advice: “Just get over it and remind yourself not to put temptation in the way next time.”

Temptation can mean many things for different dogs. As a puppy, my lab Django would steal stuffed animals from my son’s bed and in thirty seconds, a SuperMario plush could be a mess of white fluff strewn across the living room (like this). After she did this a few times, I learned to keep my son’s door closed. It took about a full year for Django to fully stop munching on stuffed video game characters (and even now and then if a plushy is near her, she is tempted). Had I allowed her have the opportunity to get at the toys, she would have gladly eaten all of them.

In the case of potty accidents, owners need to find a way to relieve their dogs even few hours whether that means a dog walker or coming home themselves. It’s cruel to force a dog to hold it for hours on end; most dogs will only use the floor as an absolute last resort.

Yes, those dog shaming memes are funny, mostly because of the guilty looking faces, but in reality, dogs do not know why you are mad, so do your best to prevent the incident before it happens.