Holidays Hazards And Your Pets: Tips To Keep Them Safe! 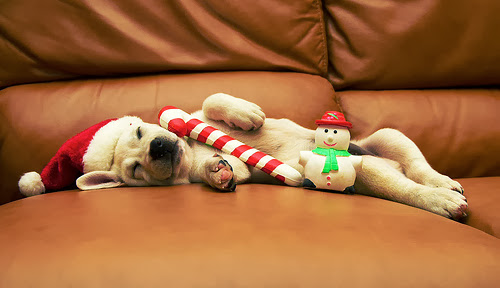 From munching on colorful holiday light bulbs to ingesting chocolate treats intended for human consumption, pets are exposed to a variety of dangerous objects during the holiday season. In 2012, Veterinary Pet Insurance Co. (VPI) policyholders spent more than $24.3 million on medical conditions commonly associated with the holidays.

As the season approaches, VPI reminds pet owners of the potential dangers presented to our four-legged companions.

Below are the most common holiday hazards for pets:

Medical Conditions Associated with the Holidays

Intestinal foreign body – surgical (foreign object in the intestines), the most expensive medical condition associated with the holidays, costs an average of $2,033 per pet.  The digestive system’s inability to pass tinsel, ribbons and bone fragments (from holiday meats) are examples of foreign objects that could require surgery for removal.

Of the 269,471 claims processed during the holiday months (November through January 2012), 25,731 were for conditions commonly associated with holiday festivities. Of those claims, 17,955, or 70 percent, were specifically associated with vomiting and diarrhea, illustrating the importance of keeping pets from eating tempting seasonal items.

Keeping Chocolate Away from Pets

VPI received 1,016 methylxanthine (chocolate toxicity) claims in 2012. The 221 claims that were submitted in December alone presented a 306 percent increase over an average of 72 methylxanthine claims submitted during the other 11 months of the year. Chocolate toxicity claims had an average cost of $378 per pet. Although death only occurs in approximately one in every 3,000 chocolate intoxication cases, the ingestion of chocolate could result in vomiting, diarrhea, urination, hyperactivity, heart arrhythmias, tremors and seizures.


“With the increased activity and exposure to dangerous items during the holiday season, it’s important to keep a watchful eye on our pets,” said Carol McConnell, DVM, MBA, vice president and chief veterinary officer for VPI. “Pet owners should be sure to place all potentially hazardous items out of reach. Taking necessary precautions in advance will keep the holidays happy, and hopefully avoid a trip to the veterinary emergency room!”